Home Team Technoprint: Let us introduce to you, George…

Team Technoprint: Let us introduce to you, George…

Team Technoprint currently consists of over 25 members of staff.  Each and every person has a special role to play within the organisation.  Team work is key to our success.  With this in mind, we would like to introduce to you all, a member of staff each month…

We would like to introduce you to George Murphy.  George is one of Technoprint’s apprentices and joined as a Pre-Press Operative exactly a year ago!

Working within our Studio department, George is responsible for designing and creating proofs to the satisfaction of our customers, always working to the ISO9001, PS9000 and ISO14001 standards.  He works closely with our printing department to ensure that plates are produced in a timely manner to meet their schedule.

As an apprentice, George is lucky to be able to gain a qualification at the same time as working.  He is currently studying level 2 of the BPIF’s Digital Pre-Press Qualification and hopes to continue further with his study as he progresses within the company.  George also completes ongoing internal training.

George is an integral member of the Continuous Improvement Team and has recently implemented a more efficient way of archiving records.

George is an avid football fan, supporting Manchester United.  What George doesn’t know about football isn’t worth knowing.!  When he isn’t watching football, he is a keen gamer and TV fan.  When he isn’t doing any of the above, he finds time to spend time with his family and friends.  Although he is only just starting his working career with Technoprint since leaving education last year, George’s long term personal goal is live abroad, preferable somewhere hot!

When asked what the best aspect of working at Technoprint is, George couldn’t give just one answer but two.  Those two best things being working towards gaining a qualification and the people he works with daily in that everyone is different and being adaptable and flexible is important.

On a final note, Technoprint would like to congratulate George on his one-year anniversary, we wish you many more successful years with the company.  Thank you for your contribution thus far. 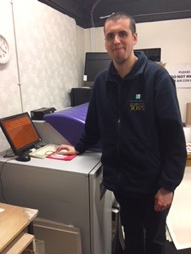