Here at Technoprint, we are proud supporters of National Apprenticeship Week and recognise the amazing contributions each and every one of our apprentices makes to our company.

We are very proud to boast that one of our own apprentices, Toni Webster, has been shortlisted for the High Sheriffs ‘Apprentice of the Year’ Award! The winner will be announced in March – the very best of luck to Toni!

We are extremely proud of all our apprentices and value the apprenticeship scheme as an excellent method to introduce people into our industry, gaining a valuable qualification whilst still earning. As part of our celebration of National Apprenticeship Week for 2020, we wanted to share some of the fantastic success stories of some of our previous apprentices from the Technoprint team:

Russell began his training by undertaking a Level 2 Qualification in Machine Printing, which we are currently waiting to hear back with his results.

Russell will be one of our first Apprentice Production Operatives who is cross-skilled within print and folding.  Russell has also been recognised by his colleagues as employee of the month for being hard-working, with a positive, can-do attitude and demonstrating significant improvements in his output.

When asked about what Russell most enjoys about working at Technoprint, he answered:
“The team, a bunch of brilliant and hardworking individuals.” 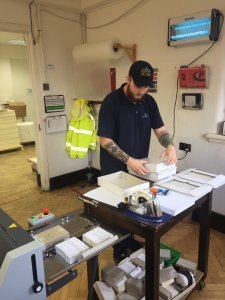 Toni is another Technoprint success story, celebrating four years with the team this month! Toni joined in February 2016 as Business Administrator / PA to the Managing Director.

During staff absences, Toni began assisting the Studio department with artwork proofing and other studio duties. After a short period of time, Toni transitioned to the department full-time as Production Administrator and Pre-Press Operative and began her Level 3 Print Administration Qualification, for which she is now waiting on her results.

Toni aspires to continue training and taking on new challenges, such as a Level 4 Qualification or potentially a degree apprenticeship. Following her recent promotion to Studio Coordinator, Toni now supervises her successor, George, who is now our Production Administrator and Pre-Press Operative and completing his Level 2 Print Administration Qualification.

When asked about what Toni most enjoys about working at Technoprint, she said:
“I love that there is always room to progress and achieve more. I am happy to be involved in so many projects which keeps my job interesting and fulfilling – and challenging at times!” 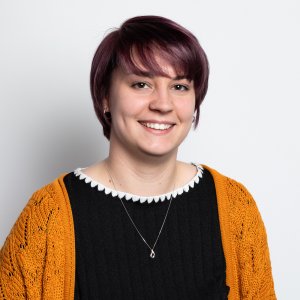 Jonny joined the team in July 2019 as Production Operative, based initially in the folding department. Having never worked in this industry, Jonny is keen to take on training to further his skillset. Within a few months, Jonny had started his Level 3 Post-Press Technician Qualification and has already began to implement his learning in his everyday workload to overcome problems and challenges. Jonny looks up to his fellow colleagues for support and guidance, aspiring to become as knowledgeable as they are in this industry. After completing his Level 3, he looks forward to progressing within his role and potentially gaining further qualifications.

When asked about what Jonny most enjoys about working at Technoprint, he commented:
“The environment is great, everyone is always willing to help and work as a team to get the job done.” 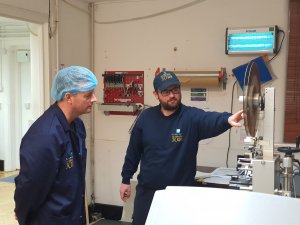